“Turtle Talk with Crush” at Epcot took me by surprise. I thought it was going to be a one-way educational film narrated by Crush, the totally tubular turtle from Disney·Pixar’s Finding Nemo. But it was interactive! George, Evie, and Grey sat with all the other munchkins on the floor in front of a big screen that was our window to the ocean world. Soon Crush swam up and started talking with the kids. Actually talking with them! In real-time. For the next 15 minutes I was captivated. Using 3D voice-activated computer animation, Crush improvs directly with the audience. 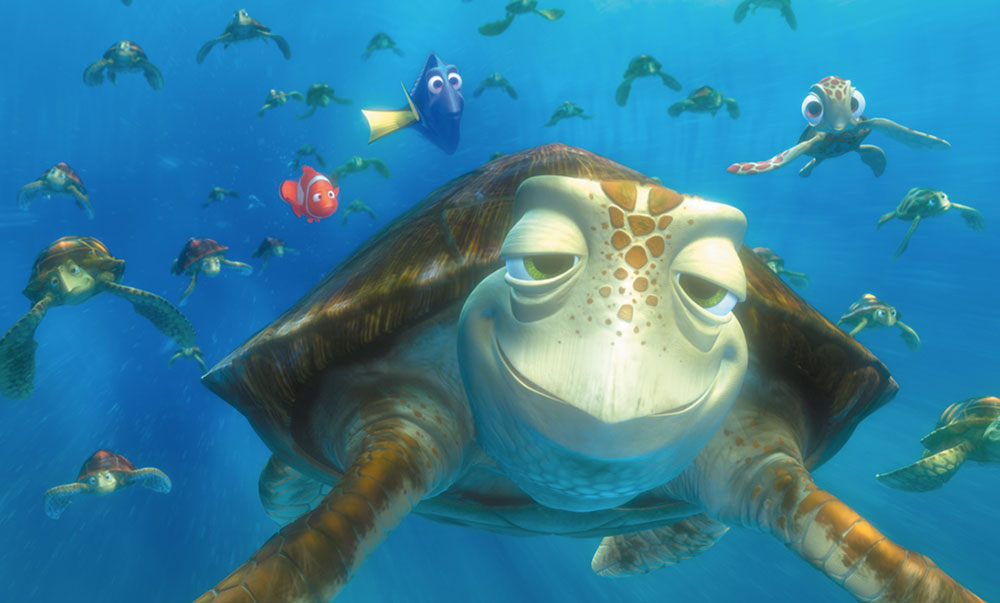 By complete luck, Crush took a fancy to my kids. In his totally radical surfer accent, he directed his first question to Evie, “the little dudette with the purple shell and double flippers” (she had double braids in her hair and was wearing a purple hoody). He asked her where she was from and how she got to Epcot. She said, “Canada! I drove!” With a shocked expression on his face Crush replied, “Whoa! Dude! You can drive?” The theatre broke with laughter. Next, he asked Grey, the “little dude with the grey shell and spikey fins” if he had any questions. Grey asked him, in his 3 year old dialect, “When you are in that screen, is there chlorine in there?” No one could understand Grey. Crush paused a moment and then replied “……..cha?” (yes?). The audience laughed. He asked Grey if he had any other questions. Grey asked the exact same question again. Crush answered, “…………… nah?” Belly laughter throughout the room! The experience was amazing because of the wit of the man behind the screen talking as Crush and the bang-on facial expressions. A big winner!